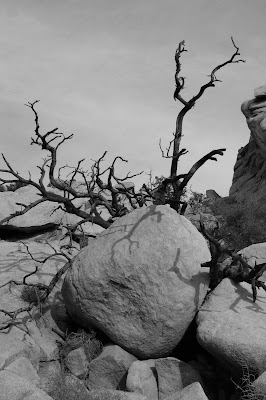 When the WWW came to be, it was heralded as a means of bringing us all a little closer. But, the sometime prevailing imagery is that of a socially awkward person creating an online persona to communicate with other disaffected folks who had created their own virtual personalities.
The web can be a scary place. We have all heard the stories; some true, some firmly entrenched as urban lore. But, amongst all the flotsam and junk, real moments occur where connections are made that finally deliver on that early promise of making the world a smaller place.
Two posts ago, I received an amazing comment from Nina in Copenhagen. She spoke of things that I had posted, her own experiences, and mentioned that she too had stood in nearly the same spot two years earlier where I had taken a photo and took a picture of the limbs coming out from behind the boulders and thought it looked like a spider as well.
Thanks to the WWW, an expat in Europe can stumble onto a little virtual waystop and discover that someone else took the same photo of the same boulders and limbs, and for the same reasons. Thanks to the WWW, I follow the lives of folks in Wisconsin, the pains of a breast cancer survivor, and the creative musings of folks from all over the map. The world is a little smaller and I like it.
So, without further adieu, The above shot is Nina's photo of the spider tree.

Posted by The Wandering Blues at 6:06 AM 0 comments

Every year, I run in a team relay called Baker to Vegas. It's a 120 mile relay challenge pitting law enforcement agencies from all over the world. This year, 250 teams from as far as Canada, the UK, and Australia showed up to run on a little two lane road in the middle of nowhere (that's a total of 5000 cops) near Death Valley National Park. There's a reason they call it Death Valley.........
For ten years I've been running and every year I swear I'm retiring. And, every year, like the swallow's returning to Capistrano, I end up doing it. But this year was different because I meant it. And it wasn't until a mere 3 weeks before the race that I was asked to run due to injuries on the team.
Damn..... First training run felt like someone beat me with a stick. I couldn't even walk from the living room to the fridge for a beer. Then, I crashed on my bike and did no running until 3 days before the race, and that was on the treadmill in an air conditioned room with a 50" wide screen TV (1080dpi w/surround sound-no suffering in the gym!).
Race day! I drive out to the start, which is actually below sea level. I've never run this leg, but how bad can it be? It's flat; not like the mountain legs I usually run. The temps aren't too bad; 86 degrees with a light breeze. Unless it's 86 in the desert (which feels like 95) and the breeze is actually a sustained 20 mile an hour headwind which makes me think of convection ovens.
I start pretty well, leading the pack at the 1 mile mark. At about 1.5 miles I notice a desert gremlin has stuffed my mouth full of cotton, depriving me of any moisture. Smack, smack, smack. Still another 1/2 mile til I pick up my support van.... By two miles, I have a white ring of spittle around my lips (gross, let me tell you) and I'm humming Christmas carols when my van pulls up along side.
"Do you need some water?" they ask? "Nope! I'm like a camel; that hump called my ass is actually where I store my water...." Duh! I start to alternate between drinking and pouring the water down my neck.
By mile 4, there's a slight rise in the road. Oh joy...... For some reason, I can't get Barry Manilow singing "Copa Cabana" out of my head; the desert is a cruel place.... Several times I start to throw up, but manage to keep it down because the infamy would be brutal.
At mile 5, it's the one mile to go marker. Along the route folks have pulled over to cheer runner's on. One person, someone's teenage son, yells out "You're too old for this...." He's right, but I yell back a string of obscenities at him that in reality probably sounds like a I've sustained major brain trauma.
Funny thing about the desert.... I could see the finish line, but it appeared to be moving away from me. Maybe it was the salt crystalizing on my eyes. Then, finally, I was in the gate, passing the baton off to the next runner while my 'catcher' and a medical staff member checked me over. The medical person was pretty damn sexy standing there with cold water. But, at some point, I read HIS name tag and realized how hard that run really was.......

So, now I'm home and retired (I swear it!) from running in the desert.

This photo is the start of my leg, which finished at about the base of those mountains......

Posted by The Wandering Blues at 6:56 AM 3 comments

The Art of Emotion 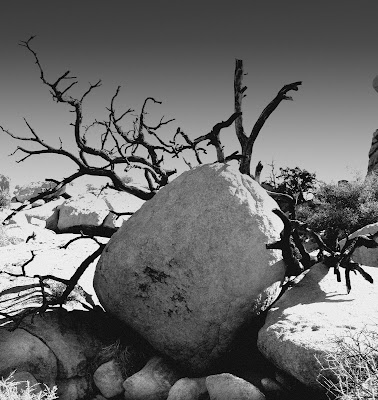 It is not often that we have the ability or opportunity to share the innermost glimpses of our being. It could be joy or pain; it could be peace or angst. Whatever the case, it is usually only shared with a very select few. But, I think artists are blessed/cursed with the means to express emotion that is unencumbered by the restrictions of language or intimacy. Art comes from someplace within. And that is why art can be so hit and miss for the observer.
But, when you get it; when you really get it, you share something with the artist that connects at such a visceral level that it's almost overpowering.
So, to all artists who labor to bring their vision to the rest of us, I thank you!
One last shot form Joshua Tree NP. I found a burnt scrub oak next to these boulders. Kyle thought it looked like a giant spider (it does), but the starkness of the scene was very appealing.

Posted by The Wandering Blues at 8:23 PM 6 comments

Seeing in Black and White (and Gray) 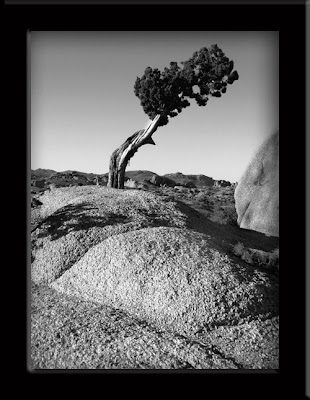 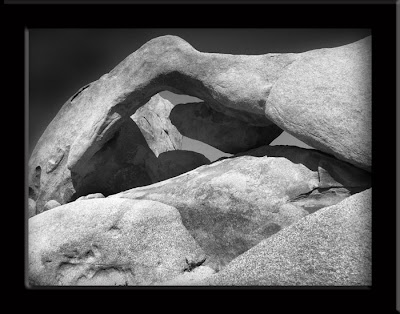 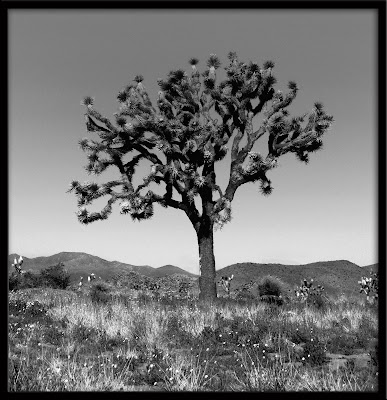 Just a gallery of shots from Joshua Tree this weekend. I'd mention to anyone who says "gee, I don't have a fancy camera" that these pics were shot with a small 6 mp point and shoot digital camera bought on Amazon for about $150.00.

Posted by The Wandering Blues at 8:16 AM 7 comments 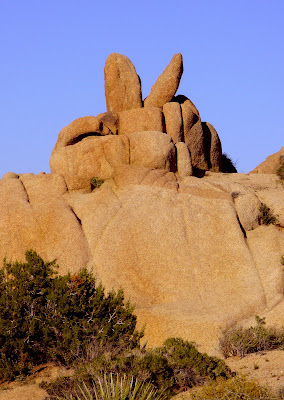 Kyle and I just returned from Joshua Tree National Park for an annual spring camping trip. The Park is home to the largest concentration of Joshua tree on the planet and is a mecca for climbing and bouldering enthusiasts.
Anyway, Kyle needed some down time, so he popped in an Indiana Jones movie into his portable dvd player while I went out for some lost hiking to find some peace. At sunset, there are not too many places more beautiful than Joshua Tree, and the smell of desert sage and wildflower was pretty intense.
And I found peace.... Literally! Low and behold, this rock formation jumped out at me as looking just like a peace sign; a giant 60' high peace sign!
So, if you go to wild places looking for peace, you never know where you'll find it!

Posted by The Wandering Blues at 3:42 PM 1 comments 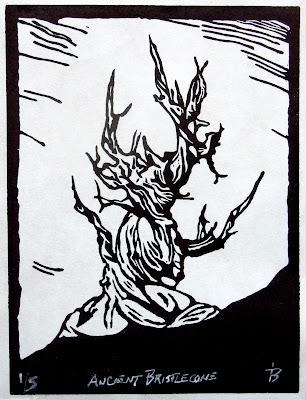 The National Park Challenge I'm a part of in the Printmaking Forum on WET CANVAS has really kept me busy coming up with a variety of scenes. This print is from the Ancient Bristlecone Pine Forest in the White Mountains of California.
This grove of Bristlecone's contains Methuselah, the oldest known living thing on this planet. At 4700 years old, it's life spans the rise and fall of some of the greatest civilizations known to man, including the Egyptian, Greek, and Roman cultures. It's more than double the age of Christianity and over 20 times older than our country.
This print is of another tree as Methuselah is not identified in order to protect it from trampling, vandalism, etc.

Posted by The Wandering Blues at 2:04 PM 2 comments

I Don't Even Know What to Say 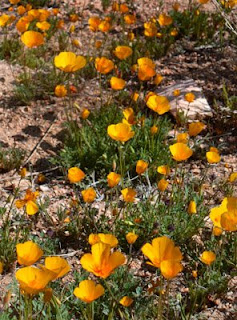 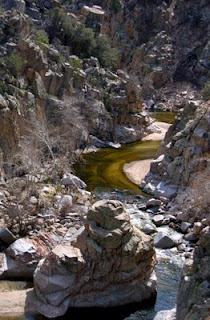 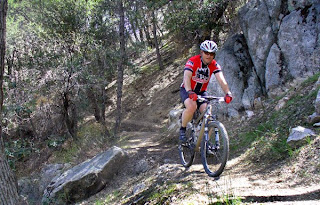 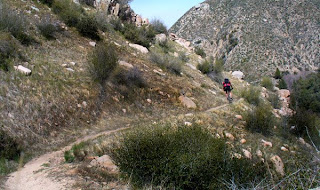 My son is 12. He's had a mutual crush on a girl since kindergarten. Maybe it's because she has always been the tallest kid in school; maybe it's because they are both very decent young persons. Anyway, we've always thought it was kind of cute that they have made 'googly eyes' at each other for so long.
This week, Kyle told us he wanted to ask her out. We talked about it and figured it would be fine because 'asking out' meant coming over to watch a movie and play video games. In his mind, and hers, it was nothing more than taking those first awkward and innocent steps to growing up.
We told Kyle she would need to discuss it with her folks and he would have to be respectful of her's and her parents decisions and feelings (keep in mind, the young lady is all for it....) Today, Tami talked with the mom, who we have been friends with for years; who has let her daughter go to musicals and other activities with us; and who has never had any issues with Kyle or us.
She said she didn't want Kyle going out with her daughter because he is a non-believer. Apparently, she found out Kyle had a debate with a fellow student on evolution vs creationism in the strictest sense. A couple of his 'friends' labeled him a 'non-believer' and told the young lady (who's family is very religious). Apparently, it made its way to the mom.
First, I can't believe this lady would tell Tami. Then, to find out, she told her daughter the same and now it's floating around school that she can't go out with a non-believer. I think the appropriate exclamation here is "JESUS CHRIST!"
We have raised Kyle to be sensitive, decent, respectful, and tolerant of other people and cultures. He has attended church functions, but has not embraced it. He knows and hangs out with folks of all faiths. I have told him, what's in the heart is more important than the symbol on the chest. But, wow.... The closed minded gall. Despite it all, I told Kyle if he wanted to attend church to learn more about Christianity, he could. I've always believed in being open towards all comers.

I could rant all day, but I took a ride instead. Above are some photo's from this afternoon.

Posted by The Wandering Blues at 5:10 PM 3 comments 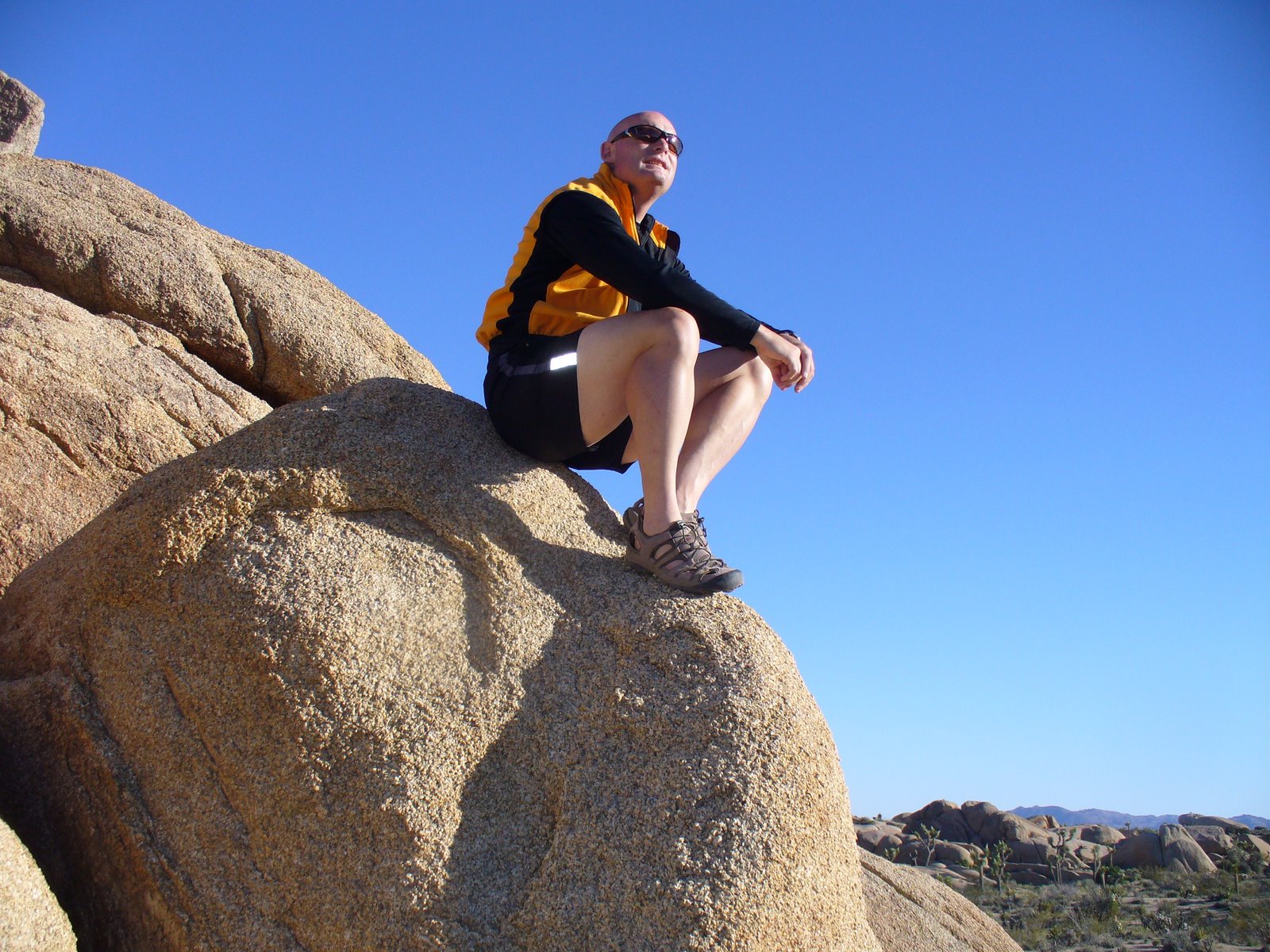